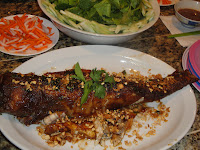 The other day, my older brother asked me to make dinner and have his family over;  I decided to make Grilled Catfish and brought it over to his house for a feast with his mother-in-law's savory mắm tôm (pickle shrimps) and thịt heo luộc (boiled pork) rolled in rice paper.

As I mentioned in the last Mahi Mahi post, Grilled Catfish is one of the healthy dishes that my family enjoy. I often prepared Cá Nướng (Grilled Whole Fish) then rolled it up in rice paper with our homegrown lettuce and herbs, sliced cucumber, daikon and pickled carrot and strings of noodle if you want to fill your tummy up quickly. Then, dipped it in mắm nêm or mắm ruốt (Fermented Anchovy Dip or Salted Fermented Shrimp dip). I prefer my mắm ruốt dip over mắm nêm; if you make the mắm ruốt dip just right, it actually tastes as good as mắm nêm or better, but cheaper. If you prefer a milder, less fishy-flavored dipping sauce, then this would be ideal.  Here's to a delicious healthy meal for the whole family.  I hope you enjoy it as much as we do. 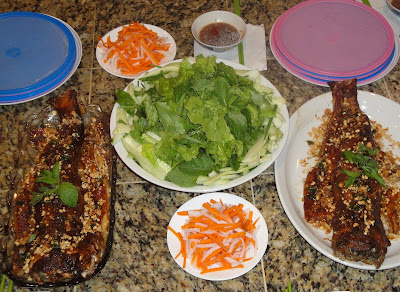 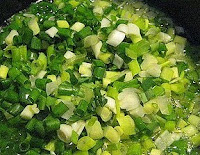 1 bunch of scallions, chopped
1 tablespoon oil
Pour about 1 or 2 tablespoons of oil into a pan on high heat. When the oil is hot, add in the chopped green onions. Stir and remove it from heat. Set it aside.

Preparing the Fish: buy a whole cat fish from any Asian stores. You can buy live or iced catfish. I always pick the one that has small head as the meat are usually more tender.  Ask the butcher to clean and gut the catfish. At home, put it in a kitchen sink with hot water. Use a small knife to scrape out all the black layer on the fish. Rinse it with clean water and blot it with a paper towel to dry it off.  Most of the Asian supermarkets would do this part for you, so make sure to ask them.

Make a few cuts along the side of the fish for the marinade to penetrate. Make a long deep cut from top to the tail of fish. Lay a fish on a baking tray with foil paper on the bottom if you don't want to clean up the tray later on. 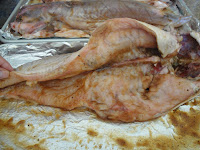 In a seperate bowl, combine all the marinate ingredients. Taste and adjust seasonings if necessary. Rub 2/3 of the marinade all over the fish. Make sure to get the marinade in the cuts to soak in flavor. Save the rest of the marinade to brush it on the fish while baking it.

Preheat oven to 350 degrees. Bake the fish for about half an hour. During the baking process, about every 5-7 minutes, make sure to brush the remaining marinate all over the fish until the fish is fully cooked. Switch Bake to Broil on High and continue to broil for about 5 minutes or just until the skin turns golden brown.  Make sure to keep the oven door ajar while broiling to allow steam to escape while broiling. 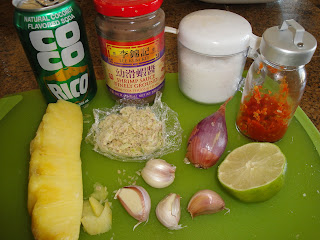 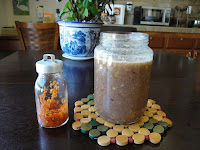 Making Salted Fermented Shrimp Dip: Mix mắm ruốt, sugar, coco juice and pineapple in a bowl.  Set aside.  Pour about 1 tablespoon of oil into a sauce pan on medium-high heat. When the oil is hot, add in the garlic, shallot, lemon grass and ginger.  Stir it until the mixture release the fragnance.  Pour the mam ruot mixture in the sauce pan.  Turn the heat to high.  Remove it from heat when it starts boiling.  Squeeze the lime juice into it.  Taste and adjust seasonings if necessary.
*
Accompaniments 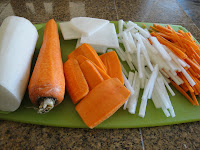 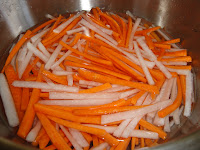 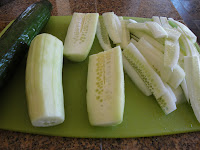 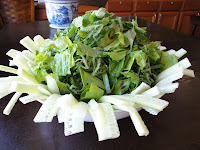 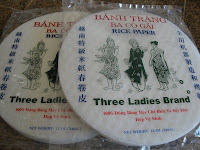 Dip a rice paper in a warm bowl of water and remove it immedietly.  Lay it flat on a non-stick plate.  Add everything on it and a piece of fish.   Roll it up and dip it in the dipping sauce. 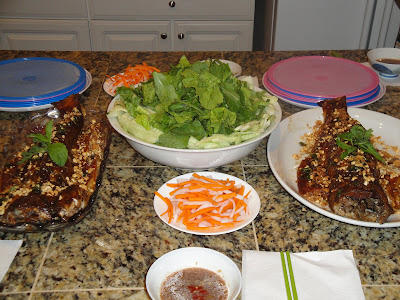 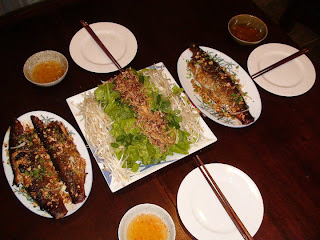 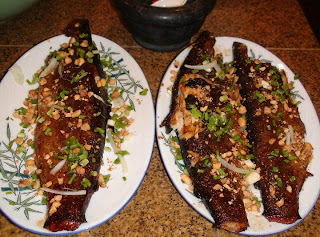 The other day I craved for banh canh cha ca (Vietnamese fish patty udon soup). I decided to make my own fish paste instead of buying it from the store. So off I went to Sam's Club and got a pack of talapia fillet. Soon the talapia were thrown into a mixture of spices and whipped into a paste. The patties made their way into the frying pan and the wonderful aroma of anything fried and crunchy would soon beckon my daughters into the kitchen.

I always like to use fish patties in Mi Quang (Yellow Noodle Soup), Bun Ca (Fish Noodle Soup) or Banh Canh. Especially for Banh Canh, I prefer to make my own udon. As a quick aside, the type of udons made depends on my craving. Sometimes I would make tapioca udon, other times rice udon or udon from a mixture of both rice and tapioca. Each one has a different texture that goes well with certain kind of meats such as seafood or fish. The recipe for udon will soon be posted. For now, let's go back to the Talapia Fish Patties which can be enjoyed as a separate dish or as a main ingredient in a bowl of udon.
*
RECIPE: Talapia Fish Patties
* * *
*
Ingredients 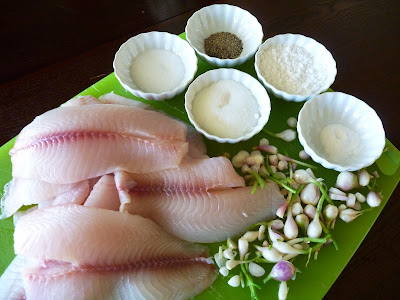 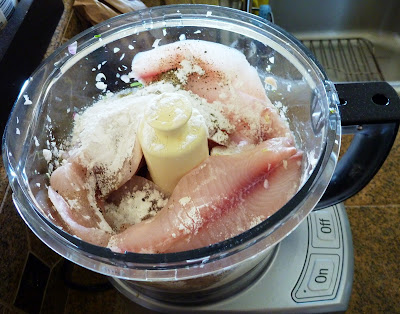 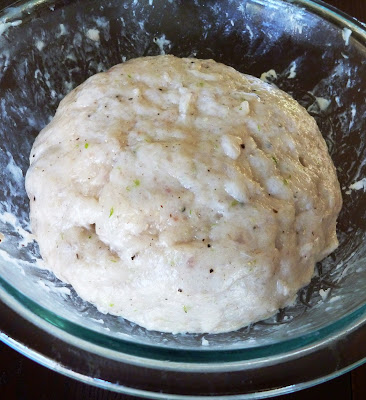 To steam it, pour the talapia paste in a baking mold or a baking pan and steam it for about 1/2 an hour. When the water starts boiling, reduce the heat to medium high just barely enough for the water to boil. Open the steamer cover a few times during the steaming process and blot dry the liquid that condense on the fish paste with a paper towel. About 5 minutes before the fish patties are done, brush the egg yolk on top of the fish patties. Close the steamer cover but leave it open just a little bit to dry off the egg yolk.

To fry, make the fish paste in patties of any shape you like. Add a tablespoon of oil in a frying pan and fry the fish patties at low heat until it turns golden brown. Transfer it to a cutting board and blot dry the oil with a paper towel. Cut the fish patties in any shape and size you prefer.

Chả Tôm Huế is a popular dish from the central region of Hue, the imperial capital.  it's a popular versatile item that can be used in different recipes. It can be used as a garnish, served as a main dish or acts as the main ingredient. The ingredients for this Chả Tôm is real simple: shrimp, ground pork, pork fat, salt, sugar, ground pepper, baking powder, and whole garlic which infuses lots of favors.  The pork fat adds richness to the shrimp paste without adding moisture to the mixture. During the cooking process, the minced pork fat melts and creates moisture. 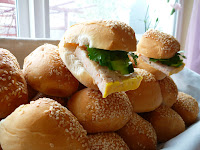 Yesterday, I threw a baby shower party for a friend.  As always, I like to make a new dish for my family and friends to enjoy.  Chả Tôm Huế was an instant pleaser.  The guests made their own dinner rolls sandwich by stuffing a couple slices of Chả Tôm,  add a slice of cucumber, sprigs of cilantro and voila a a mini sandwhich is born.   This dish went out so fast!  Chả Tôm Huế can be enjoyed  as appetizer  It also goes very well with Bún Bò Huế (Hue Spicy Beef Noodle Soup). 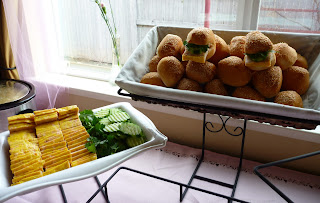 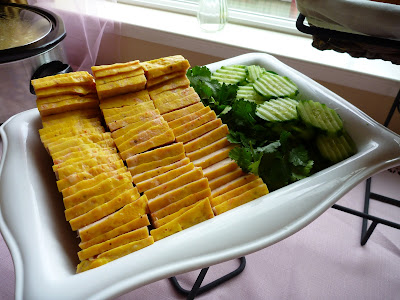 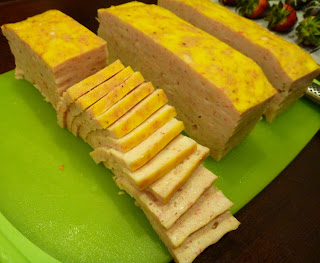 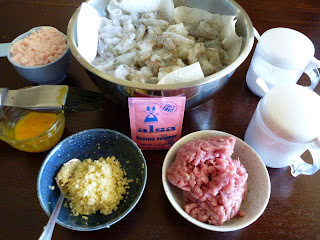 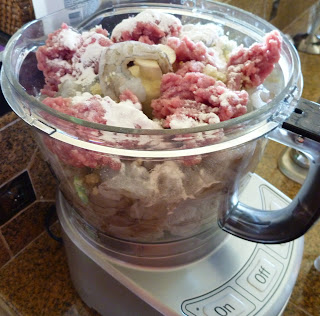 Soak shrimp in a large bowl with water  and a couple teaspoons of salt for about 10 minutes.
Rinse shrimp and drain well.
Take a handful of shrimp at a time and squeeze out all the liquid. 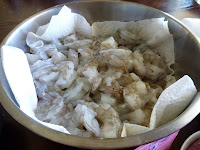 Place a few paper towel in another bowl and put all the shrimp in it so that it absorbs water from shrimp.
Combine the shrimp, ground pork, garlic, sugar, salt, pepper, baking powder in a food processor and blend until smooth and transfer to a  bowl. 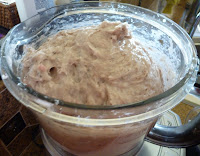 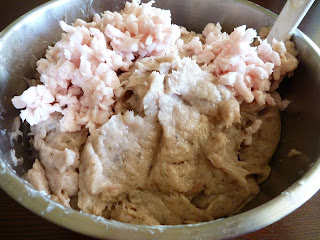 Let it sit in a fridge for about 1/2 hr.  The mixture will stiffen as it sits. 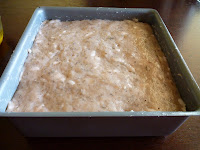 Pour the shrimp paste in a baking mold or a baking pan and steam it for about 1/2 an hour.  When the water starts boiling, reduce the heat to medium high just barely enough for the water to boil.  Open the steamer cover a few times during the steaming process and blot dry the liquid that condense on the shrimp paste with a paper towel. 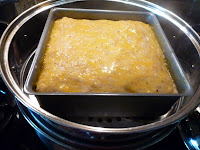 Remove it from the heat and let it cool down a little bit before removing it from the baking pan. 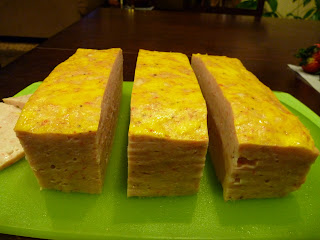 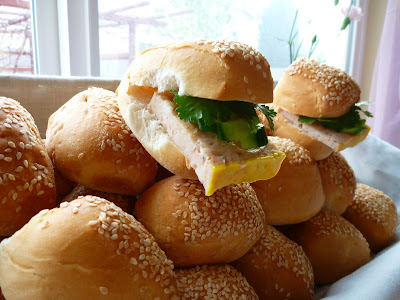 Chả Tôm can be served cold or warm.

As an aside, the recipe above can be used to make Chạo Tôm (Shrimps Sugarcane Skewer). You basically take a scoopful of shrimp paste and shape it over the end or middle of a sugar cane skewer. Next, steam it for about 5 minutes and finish it off on a grill until it turns golden brown. Canned sugarcane can be bought at any Asian Supermarket. Split each sugar cane into fourths, lengthwise and about 5 inches long. If you can't find sugarcane, fresh lemongrass stalks would work just as well.
Posted by Loan aka Annette at 11:15 PM 8 comments: