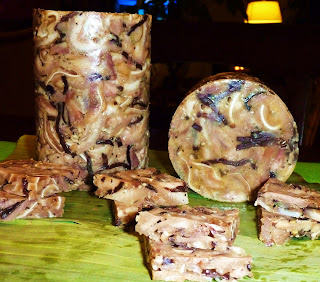 No, these are not Yankee Candles.

Giò Thủ is one of the popular dishes that we usually see during Tết.   When we were in Vietnam, my mom always bought and prepared lots of food a week before the arrival of the New Year since food plays a large part in Tết celebration; she makes sure that there would  plenty of food  to last us for at least three days since it is taboo to work or cook during the first three days of Tết.  It also would be bad luck otherwise to not have enough food at the beginning of the year. On the morning of the first day of the New Year, I  would hurry down the kitchen to taste all the wonderful dishes such as nem chua  (cured/fermented pork), chả lụa (Vietnamese ham), lạp xưởng (Chinese sausage), thịt kho trứng  (braised caramel pork), bánh chưng, bánh tét (traditional Vietnamese steamed cakes), bún măng vịt (bamboo shoot and chicken noodle soup), củ kiệu  (pickled spring onions), dưa món  (pickled vegetables in fish sauce) and of course giò thủ. 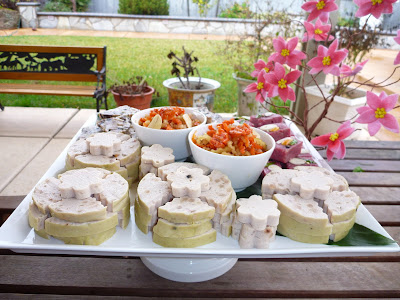 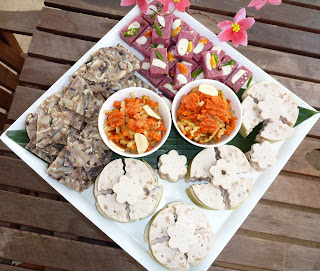 Giò Thủ originated from the northern region. Its name is unique to the north. Giò ̣̣̣̣̣̣̣̣̣̣which is usually known as Chả in the other regions of Vietnam is a meat patty or roll.  Thủ refers to the head of the pig. Giò Thủ is translated as head cheese though it's not made out of cheese but a gelatinous meaty roll made from the various parts of the head of a pig. This gelatinous head cheese is made of pig tongues, snouts, ears and cheeks which  are the main ingredients, flavored with garlic, scallions, onions, black fungus, fish sauce and black pepper then  simmered to produce the gelatinous meat. When cooled, the meat congeals because of the natural gelatin.  Traditionally, giò thủ  is wrapped in banana leaves and compressed in a  mold until the gelatin from the various parts of the pig causes it to stick together. 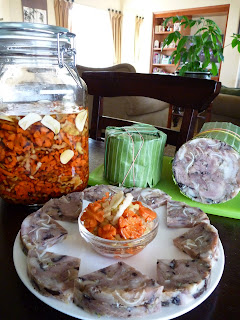 Giò Thủ is definitely an acquired dish. I love the marble texture and the crunchy cartilage with every bite.  It is a delicious, chewy, crunchy, meaty dish embodied with a deep, spicy, strong flavor from the fragnant garlic, scallion and black peppercorns; it's paired well with pickled vegetables in fish sauce (dưa món), and a cold beer. Giò Thủ is one of those cold dishes best enjoyed and not revealed; this is where ignorance is truly bliss I suppose.
* * *
*
RECIPE: Giò Thủ 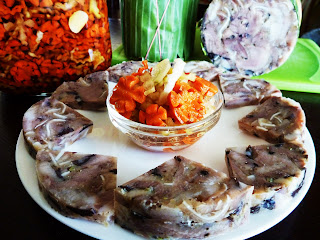 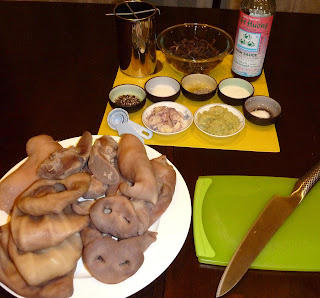 Clean the pig ears, tongue, snout with water, salt and vinegar thorougly.  Rinsed.
Boil meat  in a large pot with onion, sugar and salt  for about 45 minutes or until you can poke a choptick through the pig ears, tongue and snout . Drain and rinse cold water until cool. This will prevent the skin of the pork from turning color.
Cut the pig ears thinly.
Discard the  thin white layer on top of the tongue by using the slicer to slice it. Cut tongue thinly.
Certain part of the snout might still has hair, so be sure to shave it clean.  Cut snout thinly. 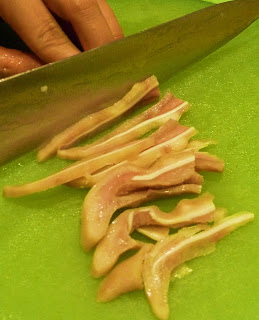 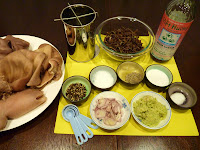 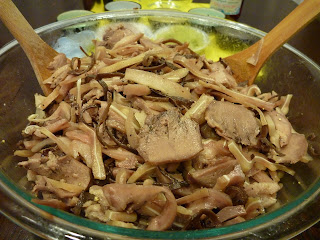 In a large pan, heat a  couple  tablespoons of cooking oil and saute the shallots and garlic until it becomes fragnant.  Add the meat mixture and saute until you notice the meats become viscous sticky, usually about 10 minutes.
Molding the Mixture 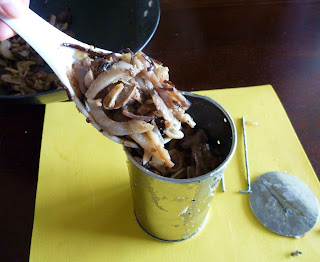 Use the Giò Thủ molding just like the one I have or use empty ridge-free walls fruit cans such as the jackfruit or lychee cans. Line the cans with  sandwich bags and tightly pack the cans with the mixture.  Every spoon of mixture you add in the mold, press it down firmly to compact the mixture. Close the bag then place something heavy on top to compact the contents further.  Store in the fridge overnight.

Remove it from a mold and wrap it up in banana leaves or plastic wrap and aluminum foil. 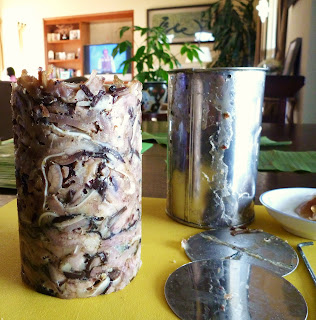 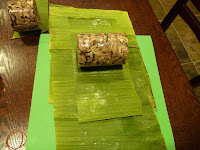 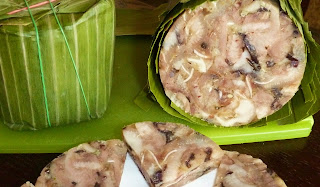 ***I went to the grocery store just to get ears and tongues which are the only two parts of the pig head that I usually use to make Giò Thủ, but then I saw packages of snouts and cheeks. Since it's "giò thủ", so what the heck...I bought everything.
Posted by Loan aka Annette at 10:58 AM