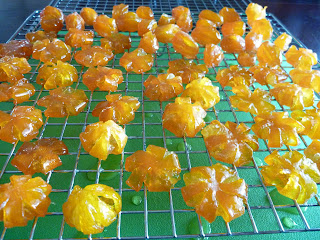 My mother-in-law's friend gave her a bag of home grown Kumquats. These Kumquats are beautiful as they are grown as ornamental plants. The kumquat fruit is orange and has a glistening rind; the shape can be round or oval and unlike the orange, the sweetest part is the rind. The inside is quite acidic and sour. 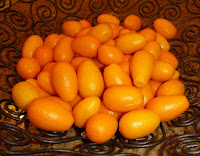 Since Tết (the Vietnamese Lunar New Year) is fast approaching in a couple weeks, I planned to make a few traditional dishes to celeberate Tết, the first being Mứt. Hence the arrival of these Kumquats was impeccable. Mứt is one of those dishes that can't be missed at Tết, so I decided to turn these beautiful but sour kumquats into Mứt Tắc (Candied Kumquats).

Just like candied orange and grapefruit peel, Candied Kumquats are also easy to make. They pair well with hot green or black tea as I learned from my husband, but watch out, you will be addicted to these. The jar I just made is already gone. I guarantee you won't just try one!
* * *
*
RECIPE: Mứt Tắc 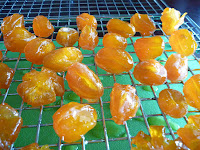 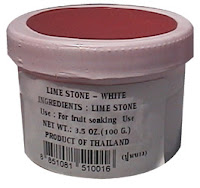 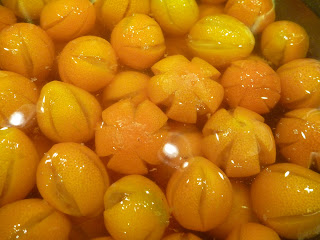 In a bowl, mix 6 cups of water with lime stone paste. Let it settle for a while until the water becomes clear. Transfer the clear water to another bowl. Discard the lime stone paste sediments. 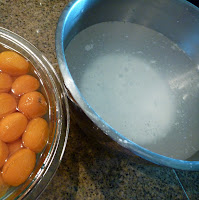 In another bowl, mix 6 cups of water with salt, set it aside.
With a pairing knife, make a few eyelet cuts into the rind of the Kumquat. 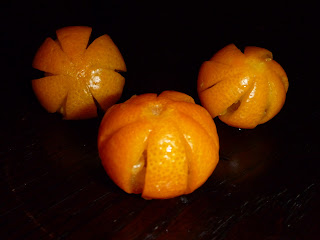 Discard any seeds by squeezing it. Keep the juice for the simmering process later. 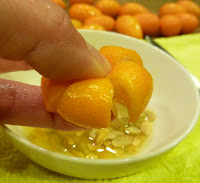 Soak Kumquats in salt mixture. Most of the recipes recommends peeling a thin layer of the Kumquat rind but this process is so time consuming, so I will leave this up to you to decide. 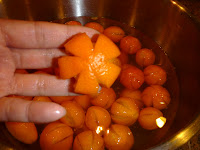 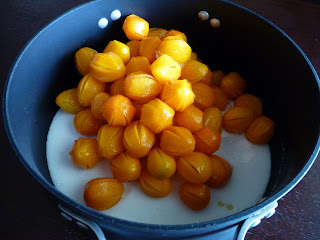 In a pot, mix sugar, Kumquats juice and Kumquats then heat over high heat until it comes to a boil. Reduce heat to low and simmer for about half an hour or until the kumquats become more translucent. During the simmering process, use a spoon to splash the syrup from the pot onto the Kumquats. 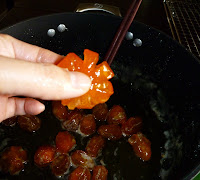 Use slotted spoon to remove the Kumquats. To create flower shapes, press a Kumquat down with your thumb and index finger. Allow it air dry on a baking rack or arrange it on a baking pan and dry it in an oven, 2nd lowest rack at 200 degree for about an hour. If you have parchment paper, line a baking pan with it to prevent the syrup sticks on the baking pan. 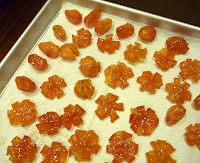