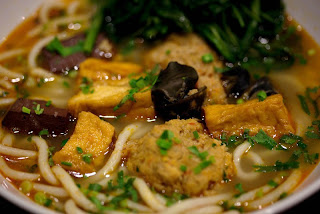 At first glimpse of a pot of Canh Bún, many people may mistaken it with Bún Riêu (Crab Noodle Soup).  Similar to Bún Riêu, they both originated from Northern Vietnam but this dish is definitely different in taste and texture.  Canh Bún's broth and riêu (crab mixtured) are much lighter.  Canh Bún's riêu is soft and  fluffy while Bún Riêu's riêu is sturdy.  In addition, it doesn't have tomatoes; the noodles are thicker and they have the reddish color once cooked in the broth and eaten with boiled water spinach or rau muống. 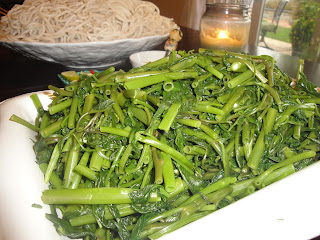 This is one of the dishes that I used to enjoy in the afternoons in Saigon as a kid.  I couldn't recall all the condiments in Canh Bún but I do always remember a distinctive reddish broth, thick noodles, fried tofu, huyết (conjealed blood), fried tofu and the main ingredient riêu made of field crab  paste (cua đồng xay) and rau muống.  As you know these are usually sold as street foods on carts or carried throughout the neighborhood in đồng gánh (bask̀ets). Everytime the lady with Canh Bún came by, the  extremely fragnant broth would turn in me into Povlav's dog. 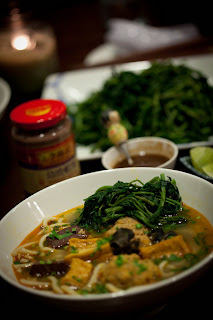 The other morning, I woke up and it was cold and immediately I wanted a comforting dish that would warm up our tummies.  Sure enough my senses lead me to the aroma of canh bún.

Since I didn't have field crabs to make riêu, I used the combination of shrimps, dried shrimps,  crab meat and crab paste with Soya Bean Oil instead.  The riêu turned out not as fluffy as I had hoped but it was tasty.  I used Annatto seeds to get the color instead the red color powder which I wonder if any Asian grocery stores carry it; therefore, it didn't have the reddish color that you would see in canh bún.  I also added  escargot (ốc bưu) which is my husband and surprisingly my daughters's favorite.  My husband didn't care much for canh bún the first time he tried it in southern California, but after trying my recipe,  he requested it again a few days later.   This time, I went to an Asian grocery store to hunt for field crab paste.  I came upon the last 2 jars. 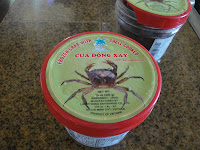 Bare in mind that the smell of field crab paste is quite pungent but has a mild taste.  I remember seeing my friend's family preparing this paste from grounding whole field crabs in a mortar.
Canh Bún made with crabfields takes less time to prepare as it's already made into paste.  In the recipe below, there are directions for both riêu cua (crab riêu) and riêu cua đồng (field crab riêu).  Authenticity would favor the recipe with field crabs.
* * *
*
RECIPE: Canh Bún 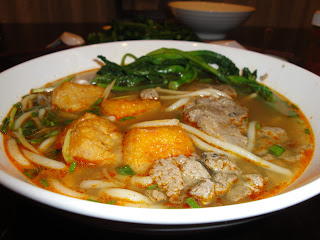 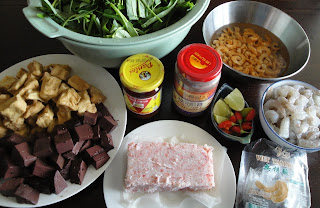 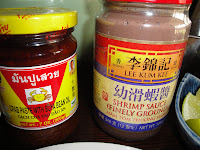 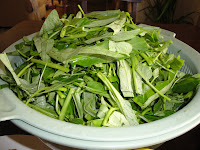 Blanch Rau Muống with half teaspoon of salt, transfer into a bowl of ice water for a few minutes  to keep it crunchy and it won't lose the color.  Drained and let dry. 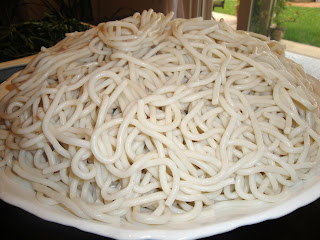 Cook the noodle until al dente, drained and then let dry.  If used Bún Tằm Bì noodle, soak it for a few hours since the size of these  noodles is big and it takes a long time to cook if unsoaked.  Then cook it at medium heat until soft.

Making Annatto Oil (Dầu Hột Điều)
In a small saucepan, bring annatto seeds and 2 tablespoons of oil over medium heat.  Stir constantly, until the oil becomes a rich, orange-red color, about 3 minutes. Add a piece of garlic to eliminate the annatto seeds smell.  Remove from the heat and allow to cool. Strain the oil and discard the seeds. 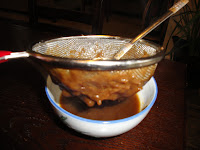 Mix a tablespoon of tamarind with a couple tablespoons of hot water.  Smash it then strain it and discard the tamarind remains.
You can also buy tamarind paste (Nước Me Chua) in a container from any Asian grocery stores. 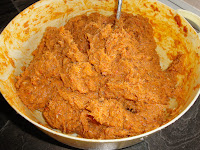 Combine dried shrimps, if used, crab paste with Soya Bean Oil, shrimps and about 1/2 tablespoon of shrimp paste. Mix thoroughly and set aside for later. 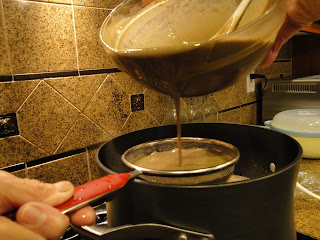 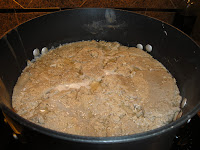 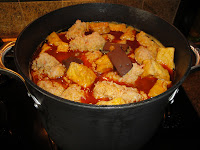 Rinse and wash bones. Bring bones to boil to get rid of scums then rinse again.  Simmer bones in a pot of water with salt and rock sugar.  Let simmer for an hour.  Remove the bones.  If using chicken broth, ignore the step above.


Turn the heat to medium.  Add a spoon of crab mixture in the broth one at a time.
Add fried tofu pouches and conjealed blood cubes. Add at least 2 tablespoons of shrimp paste,
additonal sugar, salt and fish sauce for flavor, be careful not to over salt the broth.  Without shrimp paste in the broth,  it wouldn't be canh bún. 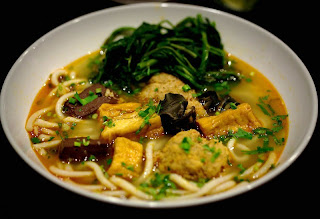 In a separate pot, bring broth, a couple teaspoons of annatto oil and noodle to boil.
Transfer to a bowl.  Top with riêu (crab  mixture), fried tofu, huyết (conjealed blood) and rau muống (water spinach) on a side of the bowl.  Garnish with spring onion and fried shallot. 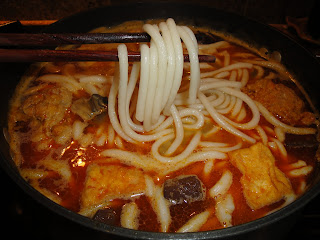 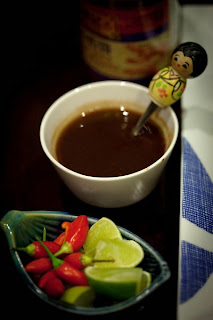 Serve with a side dish of rau muống, lime or tammarind juice and chili sauce.